While it may feel like a Monday, it is definitely Tuesday… which means time for Ten on Tuesday, hosted by the lovely Chelsea.  This week’s questions were provided by a maths-teaching friend of hers.

There was never a best day when it came to me and maths.  Every maths class was worse than the last.  I truly, truly hated it and the second I could stop taking maths, I did. (Yes, my last maths class was in grade 10).

20×10^-1. Who was your favorite/least favorite math teacher? Why?
My favourite maths teacher was Mr. N, because he took the time with those of us that hated and didn’t get math to make sure we learned.

3×10^0. Is it okay to be bad at math if English is more your thing?
I think so.  I mean, my brain just does not lend itself to maths and sciences.  I find it kinda funny that I hate maths so much, but love music.  But yes, everyone’s brains work in different ways.  I think it’s important to learn maths, but I think it’s okay to be bad at it.

0.4×10^1. How does this video make you feel?
It didn’t really make me feel…anything? If it were for real, I might be a little concerned about humanity. 😉

500×10^-2. What do you like/not like about math?
My brain just doesn’t work that way, so when you get down to the really complicated stuff, I kinda zone out.  Luckily, I don’t think that’s the kind of math that people use in their day-to-day, so I think we’re okay.

0.006×10^3. What makes someone a nerd?
Oh, man.  There isn’t one thing exactly.  And then I have to explore the geek versus nerd thing again.  I think this is such a subjective thing.

So, I’ve tossed around the idea of  finally registering a domain and using my some of my skills to set up a blog that I could customize and play around with.

I wanted something that felt more me (read: customizable) and was looking forward to dropping the ‘blogspot’ bit from my blog’s url.  No offence to blogger, we’ve had a good three years together.  I just felt that it was time to move on.

In true GFM style, I thought about it for a long time, trying to decide if I would stick to this particular handle, if I really wanted to actually register a domain, if I was going to take the time to set it up and whether or not I would actually use it, because, let’s be honest, I’m a sporadic blogger at best.

But as someone pointed out to me when I was voicing this out loud, they’ve always known me to be the girl from Mars, it fits.  I do have the ability to register, set up and customize a new blog.  And maybe that would encourage me to be less sporadic and more purposeful about posting.

Once I’d finally come to all those decisions, again, in true GFM fashion, I had registered my domain, set up my host, installed WordPress on it, browsed for a theme, installed that and began adding my badgets, widgets and list of favourites to my blogroll.

It may take me forever to finally come to a decision, but once I do… I move fast on it.

That would be my long-winded way of saying, welcome to the new home of GFM’s blog, folks.  I reckon I’m going to like it here.

So those of you that follow me on Twitter or read my blog may know that I’m on the love letter writing team for the World Needs More Love Letters. 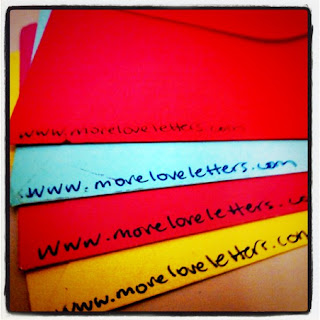 This is an amazing project that started out so simply, but has grown into something huge. Hannah was leaving love letters she wrote to strangers across New York City. She truly believed in the strength of reaching out, even to a stranger, to say “Someone cares about you, you’re enough, you’re loved, people are thinking about you.” Through the connectedness of social media, soon Hannah was receiving requests for her love letters from people all over that needed some support or knew someone that was having a rough go. And so, in September 2011, The World Needs More Love Letters was born.
This is a project that is really close to my heart. And I think that’s a pretty big deal coming from me. I’m kinda known for my cynicism and jaded-ness. My cynicism was born from the fact that we humans seem to forget that we’ve all got stories, we’ve all come from somewhere and we’re all in this together. I believe in More Love Letters, because it reminds people that we’re all in this together and if we were all able to show a little more love, the world could truly be a better place.
Love Letters is looking for some support right now and with Valentine’s Day coming up, I was thinking what better way to show your loved ones you care about them than by sharing the love and supporting Love Letters. We could really use some help paying for all those stamps. Please visit the IndieGoGo campaign for More Love Letters or think about adopting a Love Letters Bundle or writing some love letters of your own to leave behind in your neighbourhood.

Please support my work and...

Planner chic⁣ ⁣ I’ve been struggling with us

Magical weekend✨ ⁣ This has been the most mag